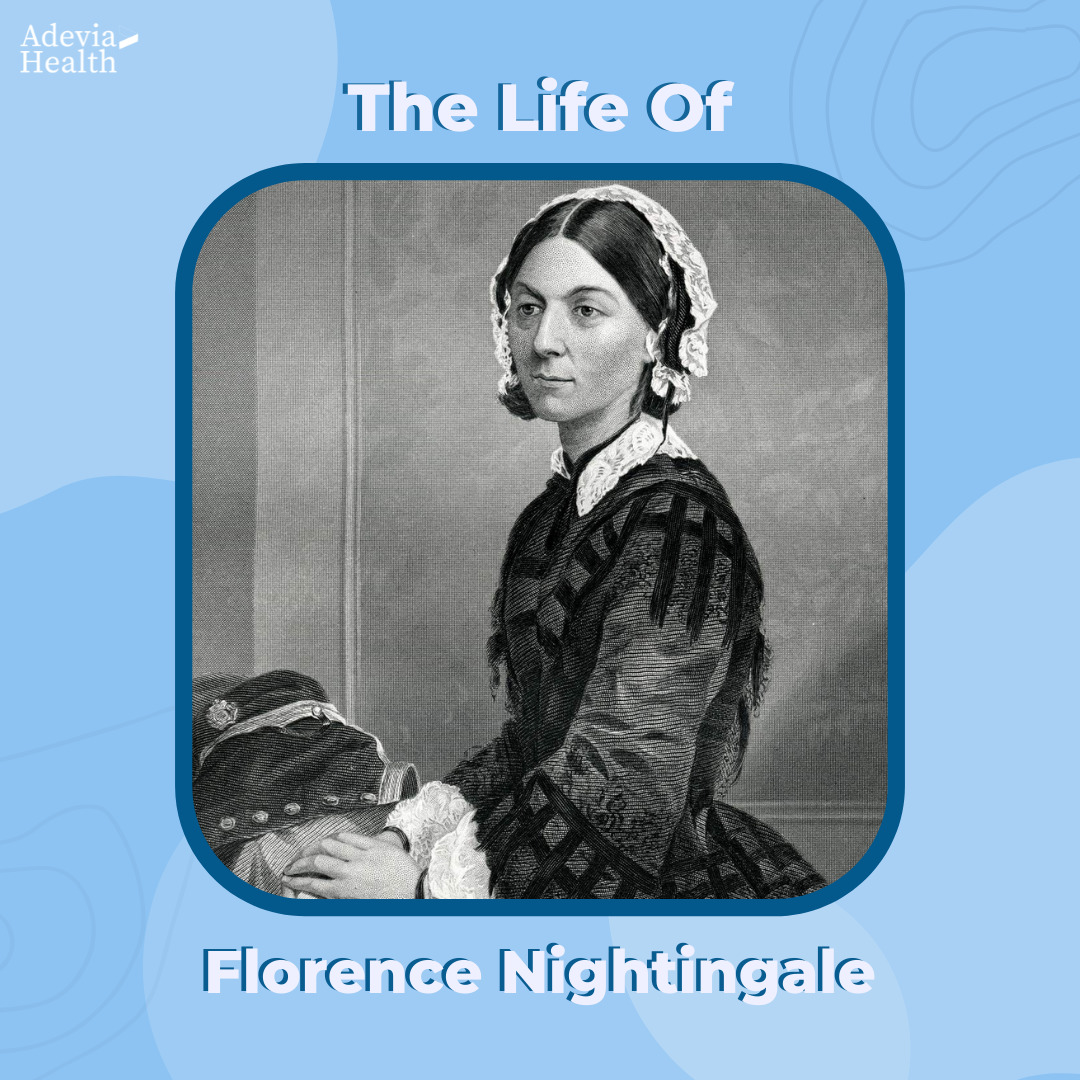 The life of Florence Nightingale

Throughout history there have been a vast amount of pioneers in the medical field, who have contributed to the quality of life for the human population. These pioneers include Edward Jenner, Elizabeth Blackwell and Louis Pateur, their accomplishments are greatly appreciated throughout the world to this day. In this article we will be focusing on the life and accomplishments of  “The Lady With the Lamp,” Florence Nightingale.

Florence Nightingale lived from 1820 to 1910, she was a British nurse, social reformer and statistician best known for being the founder of modern nursing. Florence was born in Florence, Italy and shortly after moved to Derbyshire, England with her family, where her journey to becoming one of the world’s biggest influencers in the medical field would begin.

At a young age, Florence Nightingale was active in philanthropy, ministering to the ill and poor people in the village neighboring her family’s estate. She knew from then on that nursing was her calling and it is what she wanted to pursue.

In the 1850s, Nightingale moved to the English capital, where she took a nursing job in a Middlesex hospital for ailing governesses. Within a year Nightingale was promoted to superintendent due to her impressive performances. She made it her mission to improve hygiene practices, significantly lowering the death rate at the hospital in the process.

The Crimean War began in October of 1853. For control of the Ottoman Empire, the British Empire was at war with the Russian Empire. Thousands of British troops were dispatched to the Black Sea, where supplies ran out rapidly. By 1854, there had been almost 18,000 troops hospitalized in military hospitals.

In the Crimea at the time, there were no female nurses working in hospitals. The war office has avoided recruiting more female nurses in the past due to their bad image. However, during the Battle of Alma, England was outraged by the treatment of their sick and injured soldiers, who not only lacked adequate medical care due to hospitals’ severe understaffing, but also suffered in abhorrently unclean and cruel circumstances.

In late 1854, Secretary of War Sidney Herbert wrote to Nightingale, requesting that she form a corps of nurses to care for the injured and fallen troops in the Crimea. Nightingale responded to her summons. She swiftly gathered a team of 34 nurses from several religious organizations and sailed to Crimea with them only a few days later.

Nothing could have prepared Nightingale and her nurses for what they found when they landed at Scutari, the British base hospital in Constantinople, despite the fact that they had been told of the horrific circumstances there. The hospital was built on top of a massive cesspool, contaminating the water as well as the facility itself. On stretchers scattered across the halls, patients lay in their own feces. They were hurried by rodents and bugs. As the number of sick and injured swelled, the most basic commodities, such as bandages and soap, became increasingly short. Water had to be rationed as well. Infectious illnesses like typhoid and cholera claimed the lives of more troops than fighting wounded.

The straight-talking Nightingale got right to work. She bought hundreds of scrub brushes and assigned the least ill patients to scrub the hospital’s interior from floor to ceiling. Every waking minute of Nightingale’s life was dedicated to caring for the troops. In the nights, she made her rounds through the dark corridors, holding a lantern and ministering to patient after patient. Soldiers began to refer to her as “the Lady with the Lamp,” as she moved and soothed them with her never-ending supply of compassion. Others just referred to her as “the Crimean Angel.” Her efforts cut the hospital’s mortality rate in half.

After the war ended, Nightingale returned to her childhood home at Lea Hurst in the summer of 1856, after the Crimean crisis was finished. She was greeted with a hero’s welcome, which the humble nurse tried everything she could to avoid. The Queen honored Nightingale’s efforts by bestowing an engraved brooch known as the “Nightingale Jewel” on her and awarding her a $250,000 prize from the British government.

The money was put to good use by Nightingale, who opted to utilize it to advance her mission. She helped fund the creation of St. Thomas’ Hospital in 1860, as well as the Nightingale Training School for Nurses within it. Nightingale became a public figure of adoration. In honor of the heroine, poems, songs, and plays were composed and dedicated. She was idolized by young ladies who wished to be like her. Even rich upper-class ladies began enrolling at the training school, eager to follow in her footsteps. Nursing was no longer looked upon by the higher classes thanks to Nightingale; in fact, it had grown to be seen as a respectable profession.